Erika Reid: My wrestling. My culture.
96
post-template-default,single,single-post,postid-96,single-format-standard,theme-stockholm,stockholm-core-1.2.1,woocommerce-no-js,select-child-theme-ver-1.1,select-theme-ver-5.2.1,ajax_updown_fade,page_not_loaded,wpb-js-composer js-comp-ver-6.1,vc_responsive
June 30, 2020 In Our Mob, Our Voices By Team INDIGINERD

Erika Reid: My wrestling. My culture.

My Name is Erika Reid, AKA “The Dreamtime Voodoo Witch”. 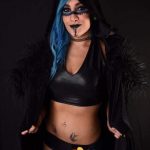 I am a pro wrestler. I have been training and wrestling for the past four years across the country. I have wrestled across New South Wales, Victoria, Queensland and South Australia, sharing my culture and passion of fighting.

In the ring I take on the persona of an ancient being, contorting my body to shape my narrative of a mystical being trapped within the boundaries of this physical form. My face has war paint across it and my costume wears my culture by threading through colours of the Aboriginal flag.

Professional wrestling is almost like a living comic book with story lines unfolding before your eyes and narratives for each wrestler coming to life. Stories are told by wrestling and fighting and having over the top, crazy characters, which build up to an aerobatic storybook.

It can be a roller coaster ride of emotions throughout the journey of the story being told. 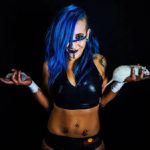 In 2019 I was invited to be apart of indigenous Comic Con in Melbourne, Australia. A two day special event and it was fantastic and fun to meet new forms of art, new people and characters and to share my character, art and culture with others.